It was widely known that Phobos was claimed under the generous provisions of the 2028 Outer Space Treaty Extension, rather than the Foundation Society Homesteading Law which was ratified the following year. This has meant that development on Phobos has been managed by the Phobos Development Organisation (PDO) and had been largely restricted to mining and staging operations. In 2065 The Foundation Society proudly announced that an arrangement was reached to alter the remit of the PDO and to transfer the lease for the entirety of Phobos and the space around it to The Foundation Society.

This arrangement allowed The Foundation Society to issue a Request for Proposal for the construction of a significant settlement at Phobos to be reinvestigated: for example, the Mars Gateway proposal which became Aresam was originally designed to be based on Phobos rather than in a free orbit. Given the success of Aresam and the need for more cargo transfer capacity than was specified for it, it was decided to cancel the Aresam Expansion project and to invest in a new, very large, well resourced installation at Phobos.

This coincided well with the intention to move art off-world. This winning proposal from Earhart Advanced Industries was for a settlement, which has a strong dedication to artistic and cultural pursuits to reflect the treasure-trove entrusted to it. This name was chosen to honour the cultural importance and the craft of storytelling, in all its forms, and as a reminder that location and station should never be allowed to prohibit the appreciation of art, or stand in the way of creative expression. 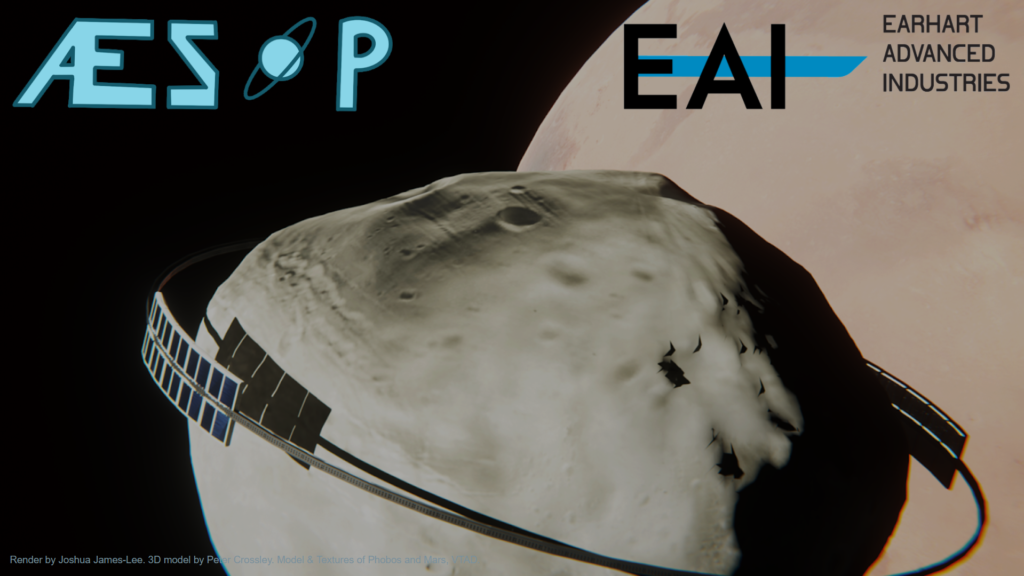 Location – the environs of Phobos

This webpage refers to a fictional company which is part of the UK Space Design Competition. No information presented here or implied herefrom should be regarded as factual. Any similarities with real events, places, or persons are purely coincidental.