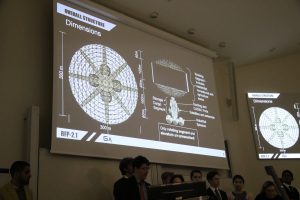 It was great to join all the students this weekend who took part in the UK Space Design Competition finals for 2018. This year the students were transported forward to the year 2038 where they were tasked with designing Bellevistat, a space settlement in orbit around the Earth-Moon L4 libration point.

The challenge conjured up for me images of the rotating wheel space station from Stanley Kubrick’s movie 2001 A Space Odyssey. I must admit that I have always been a sucker for space movies. I love the moment in Apollo 13 where Tom Hanks is scribbling mathematical equations on a scrap of paper in an attempt to calculate their way out of immanent death as they plunge back to Earth. Or Matt Damon applying his biological skills to survive on Mars in the film Martian. Or Anne Hathaway and crew using Einstein’s theory of general relativity to work out how many years on Earth they were about to lose as they entered a huge gravitational field in Interstellar.

So I could recognise the buzz of excitement that students this weekend felt as they got the chance to be involved in their very own space story, designing the set and using their mathematical and scientific skills to solve tricky problems that arise during their own adventure. Of course as we go forward, adventures in science fiction are increasingly becoming the next ideas for science fact. The designs that the students have been coming up with over the weekend could well be the ingredients for a future reality of a settlement on Mars or the Moon or orbiting the Earth.

One of the things I love about the competition is seeing the combination of skills that the students bring to the competition. It is one of the tragedies of our education system that we treat subjects in isolation. You go from the maths lesson to geography to art never realising the huge connections across the curriculum. The competition really fights this silo mentality requiring students to bring their scientific and mathematical expertise to bear (they need to know what a libration point is) but combining that with an artistic flair to design their settlement, a business acumen to cost the whole project and finally bringing their presentational and theatrical talents to present the project to the judges. The competition builds bridges across all these aspects of the education system.

The students set out on Saturday morning on an amazing journey of discovery and exploration. Although they come back to Earth on Sunday afternoon, I am sure the competition will be the launch pad for a life-time’s journey exploring science, the arts and the universe.

Marcus du Sautoy FRS, OBE
Is the Simonyi Professor for the Public Understanding of Science and a Professor of Mathematics at the University of Oxford